Lama Tsongkhapa // Articles // Who is Manjushri? 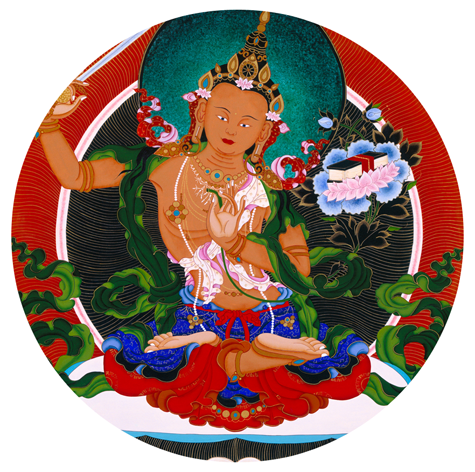 Manjushri is the embodiment of great wisdom of the highest Enlightenment. According to the elements he can appear in all kind of colours like blue or green but the most popular forms are the orange and the white Manjushri. Sometimes, Manjushri is depicted riding on a lion, the king of the beasts, symbolizing that Manjushri teaches the Dharma without fear or favour.

Lama Tsongkhapa, after engaging in an intensive 4 year retreat in a cave, was able to see Manjushri and also receive teachings directly from him.

The Bodhisattva Manjushri appears to those who meditate on him. Even though we cannot see him, yet, he instills and stimulates us to develop wisdom to free ourselves from karmic bondages. For this reason, images of the Bodhisattva Manjushri can often be seen in meditation halls, libraries and scripture study rooms in monasteries.

Manjushri has emanated in many forms, orange, green, blue, white, four-armed or sitting on a lion. Manjushri has also emanated as wrathful protectors like Yamantaka, Kalarupa, 4-Faced Mahakala and Black Manjushri.

The origins of Manjushri is not that straight forward and lack details of its ancestry unlike other buddhas. French scholar Marcelle Lalou has speculated that Manjushri and Pa~nca’sikha are one and the same due to their similarities. Or Pa~nca’sikha could be an early emanation of Manjushri. Saraswati is Manjushri’s consort, she also appears in a wrathful form along with Kalarupa.

In 1392, Tsongkhapa went to Lhasa with Umapa and made abundant offerings to the famed Jowo Rinpoche statue in Jokhang Monastery. During a very intensive Manjushri retreat there, he gained a very clear vision where Manjushri appeared within a mandala. On Manjushri’s chest was written a red mantra. However, out of deep humility, he did not speak about his visions until his Lama Umapa asked him about them.

His right hand holds a flaming sword, which represents the sharpness of prajna that cuts through the root cause of suffering and the net of wrong views which binds us to the three lower realms. The flame on the sword signifies the dispelling of the darkness of ignorance by the light of Wisdom.

Manjushri’s left hand holds a magnificent blue lotus flower in full bloom, on which rests the Prajnaparamita Sutra (Great Wisdom Sutra). The lotus in full bloom represents the promise from Manjushri that we can rise from the mud of delusion and afflictive emotions if we follow the teachings of the Buddha. Then ultimately, through actualizing and meditating on the Great Wisdom Sutra, attain Full Enlightenment. 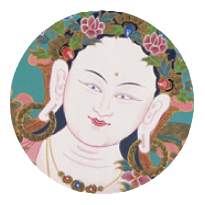 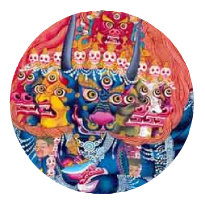 YAMANTAKA – The Ultimate Destroyer of Death: He appears ferocious but is not out to set harm to anyone but our own egos and negativities. His purpose as a dharma protector is two-fold. Firstly, to protect us from black magic, evil spirits and curses. Secondly, to bring us out of suffering by destroying the causes of our suffering. Yamantaka’s practice is one of the highest tantric practices in Buddhism and is only available to those who are initiated. 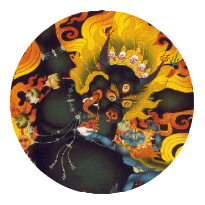 KALARUPA – The Poisonous, Distorted and Ugly: Kalarupa’s heinous form serves to remind us of our own intense ugliness when we lash out at others due to our pride, fear, jealousy and hatred. This form is actually emanated out of compassion to persuade us to look within ourselves, and how repulsive we appear to others while lashing out at them. Kalarupa’s practice can help us overcome our causes to bring suffering to others, and also protect practitioners of Yamantaka, especially during Yamantaka retreats where anger and negative forces arises. Saraswati appears again as a consort, as Tsamundi. 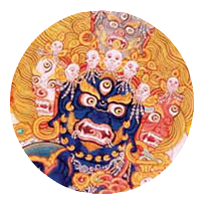 4 FACED MAHAKALA – The Great Black One: Mahakala’s four face and four arms represents his realization of the 4 noble truths. Mahakala’s fiery and ferocious appearance signifies his swift call to protect any practitioners from obstacles arising from depression and anger. He holds a sword in one hand (same sword as the one Manjushri weilds) which cuts down the causes of our sufferings and the other hand holds a trident staff which transmutes our ignorance, pride and anger. (The causes of our sufferings.) 4 face Mahakala is trusted and relied upon by high lamas like Lama Tsongkhapa and Kyabje Zong Dorje Chang. 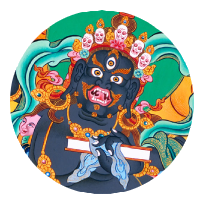 BLACK MANJUSHRI – The Wrathful Healer: The wrathful healing form of Manjushri heals our mental suffering and illness caused by mortal diseases or sickness (that are said to be incurable like AIDS, Cancer). People who are diagnosed by those incurable disease undergo tumultuous emotional phases like, depression, anger, fear and denial. Black Manjushri practice can help the patient mentally and physically. He can also clear the negative astrological glitches (that can harm us) which are caused by accident. Black Manjushri also protects us from Maras and evil spirits that hinder our spiritual practice and progress.

OTHER FORMS OF MANJUSHRI 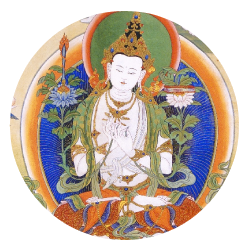 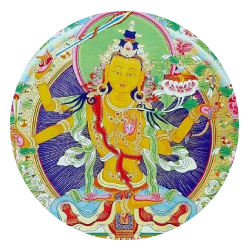 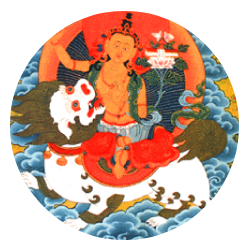 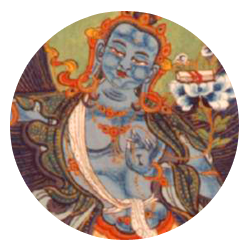 This article was posted in Articles.