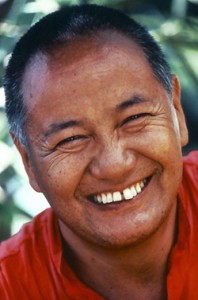 In the Western intellectual world, the common interpretation is that Lama Je Tsong Khapa was just a professor. Western people do not recognize him as a great yogi, a great practitioner, a mahasiddha. Actually, Lama Tsong Khapa taught and wrote more on tantra than on sutra, but because he did not show his mahasiddha aspect, Westerners get the impression that he was only an intellectual.

Some people think that Gelugpas, the followers of Lama Tsong Khapa, don’t do non-conceptual meditation, for example. They think that only the other traditions meditate in this way and that Lama Tsong Khapa negated this point and taught only intellectual, analytical meditation. I have heard Westerners say, “Gelugpas are always intellectualizing, always squeezing their brains.” That’s not true. You know it is not true.

Lama Tsong Khapa was already a great meditator while he was still a teenager. And from the time he was a teenager, he did not have sicknesses as we do. When he had a small problem, he would cure himself. When there was a flood or an avalanche, he would say a prayer, and everything would stop. If you read his biography, you can see that Lama Tsong Khapa was a great mahasiddha.

The Monlam Festival, the great prayer festival held in Lhasa after the Tibetan New Year, was started by Lama Je Tsong Khapa. The monks and nuns and lay people of all the traditions of Tibetan Buddhism came together to make offerings and say prayers. At the first festival there were countless butterlamp offerings. Anyway, one day the many thousands of butterlamps in the temple became one mass of flame. Soon the fire was out of control, and everybody was scared that the temple might burn down.

They ran to Lama Tsong Khapa crying, “Your offerings are going to burn down the temple!” Lama Tsong Khapa sat down, went into samadhi meditation, and suddenly all the flames were extinguished, blown out by one wind. This happened because of his inner fire meditation.

We Tibetans consider that when you can control the four elements of your own nervous system through inner fire meditation, you can also control the outside elements. Lama Tsong Khapa didn’t need an ordinary fire-engine; with his inner fire-engine, the flames totally vanished. This proves that Lama Tsong Khapa was a powerful realized being. Also at that time he perceived the eighty-four mahasiddhas in space above Lhasa.

Lama Tsong Khapa had no shortage of telepathic power. One time he was staying in a small retreat hut maybe thirty minutes’ walk from the place where he later advised Sera Monastery be built. Suddenly he left, and nobody knew why. That same day some people sent by the Emperor of China, who had heard of Lama Tsong Khapa’s fame, arrived with an invitation for him to come to China, but he was nowhere to be found. No one knew this was going to happen that day, but Lama Tsong Khapa knew, and he escaped over the mountain.

This shows that Lama Tsong Khapa had telepathic power, but it is also a good example of his perfect renunciation. He vomited at the thought of worldly pleasure. Can you imagine us in that situation? For sure we would accept the invitation! Me – I couldn’t even resist the invitation of some rich man to come to visit him. Although Lama Tsong Khapa was incredibly famous, he never went to distracting places; he stayed in isolated places in the snow mountains. But we go to the most confused places. This shows how we are, that our renunciation is not perfect.

Lama Je Tsong Khapa had many thousands of disciples all over Tibet and constantly received offerings, but he had no bank account, no house, not even one piece of land upon which to grow his food. Everything he received, he gave away. He stayed clean-clear. Ganden was Lama Tsong Khapa’s monastery, but he stayed there as if he were a guest: he came there, got things, gave them away, then left with nothing. Lama Tsong Khapa is the perfect example of living according to the Dharma.

Two or three years before Lama Tsong Khapa died, the Buddha Manjushri, with whom he had a special relationship, told him, “Now is the time you will die.”Suddenly countless Buddhas appeared and requested Lama Tsong Khapa not to die and gave him an initiation of boundless energy so that he could stay longer. Then Manjushri predicted that he would live until a certain age.

Shortly before Lama Tsong Khapa died, one of his teeth came out, and everybody saw that it emitted much rainbow light. He gave the tooth to Khedrub Rinpoche, one of his heart sons, but his other disciples said, “Oh, you gave this tooth to Khedrub Rinpoche, but can we have a little bit too?” Lama Tsong Khapa told them to pray for this, so Khedrub Je placed the tooth on the altar. Everyone did many prayers and much meditation. Radiant, rainbow light continued to come from the tooth. 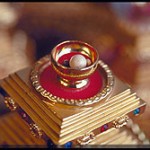 After one week Lama Tsong Khapa said, “Where is my tooth? Bring my tooth here.” When he opened the box, they saw that the tooth had become a Tara image surrounded by relic pills. Lama Tsong Khapa gave some of the pills to the disciples who had wanted them. He also predicted that about five hundred years later these relics would go to Bodhgaya. This prediction has come true: although the Chinese destroyed what remained of Lama Je Tsong Khapa’s body, some of the relics went to India when Tibetans went into exile.

When Lama Tsong Khapa did die, he did it perfectly. First, he put everything in order. Next, he said to one of his disciples, “Bring a skullcup.” He then did the inner offering meditation and took thirty-three sips of the inner offering. This was a sign that inside he was the Guhyasamaja deity. Finally, sitting in meditation in his full robes, he died. This is what distinguishes a mahasiddha. He doesn’t have to announce, “I am a mahasiddha” – his actions prove it. Lama Je Tsong Khapa proved himself.

Can you imagine being able to die deliberately and clean-clear? When we die, we leave a mess. We should motivate and pray that we die like Lama Je Tsong Khapa instead of dying like a cow. This is our human right. Pray that instead of dying depressed, with a miserable expression, you will die blissfully. Try. There is a chance. Resolve, “When I die, as much as possible I will control my emotions and die peacefully.” You must motivate, because motivation has power. When your time comes to die, because of your will-power you will remember your prayer. If you don’t have strong motivation now, you will end up completely shaking when death comes and everything goes bananas. If you know what to do beforehand, you will remember at the time of death. I am telling you this because I believe it, not because I have realizations.

One time, after Lama Je Tsong Khapa had passed away, Khedrub Je was sad. Lama Tsong Khapa had explained everything thoroughly from beginning to end, from Hinayana to Paramitayana to tantra, the entire path to enlightenment. Thousands and thousands of people had meditated upon his teachings and achieved realizations. Khedrub Je was sad because he was thinking, “Now Lama Je Tsong Khapa’s teachings are like lightning, like a mirage; they are disappearing. And unfortunately the Tibetan people are degenerating. He taught people not to cling to the desires of the sensory world, yet people are more grasping and have more desires than ever.”

Khedrub Je had reason to feel this; there were many degenerations. He was so sad, and he cried and cried. Then he prayed and offered a mandala. Suddenly Lama Tsong Khapa appeared in youthful aspect on a jeweled throne surrounded by deities, dakas, and dakinis.

He said to Khedrub Je, “My son, you shouldn’t cry. My principal message to people is to practice the tantric path. Practice this and then give it to qualified people. Instead of crying you should help to do this as much as possible, and that will make me very happy.” It’s the same with you. If you practice, Lama Tsong Khapa will smile.

Another time, Khedrub Je had some technical questions on tantra but couldn’t find anyone to answer them. Again he cried. His heart was breaking. Again he prayed strongly and offered a mandala. Lama Je Tsong Khapa manifested and gave him many teachings and initiations.

Why do I tell you these stories? It is good to know that Lama Je Tsong Khapa was a great yogi, a mahasiddha – there is no question – and that Khedrub Je had such inner realizations that just by calling on him, Lama Tsong Khapa would manifest. You should also understand that Lama Tsong Khapa’s principal field was tantra. Even though we are degenerate, we have the chance to hear his way of explaining the tantric path and to try to actualize it. We are so lucky. Even if we do not know much about Buddhist things, if we practice what we do know, Lama Tsong Khapa will be very happy.

“Lama Tsong Khapa’s special field is tantra, particularly the illusory body,” said Lama Thubten Yeshe in one of his last major teachings before he passed away in 1984. “The way he describes everything and gives meditation instructions has distinctive characteristics; it is incredibly clean-clear. When you understand them, you really get something helpful, and devotion arises. While giving this teaching, I have been feeling especially grateful to Lama Je Tsong Khapa. Because he explains the Six Yogas of Naropa in such a profound way, I feel much devotion to him. The way he puts things together, there is no question – he must be a mahasiddha.”

From The Bliss of Inner Fire by Lama Thubten Yeshe, edited by Robina Courtin and Ailsa Cameron; 1996 by Wisdom Publications, Boston.

This article was posted in Articles and tagged tsongkhapa. lama yeshe. Both comments and trackbacks are closed.